Passes Away After Operation In St. Louis

Funeral services for Mrs. Augusta Sweatman were held Monday at 2:30 P.M. at the Bluff Springs Lutheran church, with Rev. G. A. Saathoff officiating. Mrs. Saathoff and Miss Lorene Reichert sang "In the Hour Of Trial", "Lord Thy Word Abideth, " and "Some Sweet Day," accompanied on the organ by Mrs. Arthur Sweatman.

Interment was in Walnut Ridge cemetery.

Mrs. Sweatman, daughter of Fred and Elizabeth Strubbe Davidsmeier, was born December 18, 1889 in Morgan county. Earlin in life she joined the St. John's Lutheran church in Beardstown, later transferring her membership to the church in Bluff Springs.

She was married to Harry Sweatman on December 17, 1912. They were the parents of two children, Erman, now Mrs. Lloyd Smith, and Robert. She also reared a nephew, Eugene Davidsmeier. Her husband died in April 1937.

Mrs. Sweatman had been in poor health for several months, and was taken to Barnes hospital in St. Louis three weeks ago. An operation last Wednesday proved unsuccessful, and she passed awy at 6:00 a.m. Friday, April 13.

She is survived by her mother, son, daughter, three grandchildren and the following sisters and brothers: Mrs. Hannah Brockschmidt and Mrs. Emma Ruppel of Beardstown, Mrs. Herman Carls of Bluff Springs, Mrs. John Dour and Mrs. Otto Sweatman of Virginia, Edward Davidsmeier of Bluff Springs, Louis of Chandlerville, and William of Springfield. One brother, Walter, died several years ago.

Mrs. Harold R. Huppers was notified Monday by the War Department that her husband was killed in action on Luzon, March 15th.

PFC Huppers is the only son of Mr. and Mrs. William Huppers, and is a nephew of Miss Hilda schall of this city. He was 21 years old last December.

PFC Huppers entered the service in August, 1943 and received his basic training at a camp in Georgia.

Going overseas in January 1944, he served in the South Pacific for fourteen months, first at New Calidonia, then Luzon.

PFC Huppers is survived by his parents; his wife, the former Mildred Gibbons of near this city; a small daughter; and a sister, Hilda. 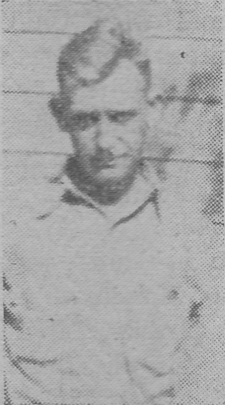 Mrs. Leonard Bridgeman of Bath received word from the War Department Thursday that her son, PFC Lewis H. Kloker, had been killed in action in Germany on March 28th.

PFC Kloker, brother of Mrs. W. R. Hierman of this city, was serving in the 2nd Infantry, Co. L, of the Third Army.

Pfc. Kloker, son of Mr. and Mrs. Hy. Kloker, was born at Arenzville June 7, 1909. He entered service on Jun 7, 1941, going to Camp Wolters, Texas for training. In October of that year, he was dismissed from Army training, when men who were over 35 were being replaced.

In January, 1942 he was recalled to service and received further training at Fort Sheridan, at the Proving Grounds near Savannah, Illinois, and at Fort Custer, Michigan. In April, 1942 he was sent to Iceland, where he was stationed for eighteen months.

From Iceland, PFC Kloker sent to England where he spent several weeks in a hospital, after which he saw service in Ireland, France, Luxembourg and Germany.

Funeral services were held Wednesday afternoon at 3:00 o'clock at the Chandlerville Congregational church for Mrs. Elizabeth Hierman who died suddenly at her home Monday morning. Rev. Arthur Schmidt of Centralia, a friend of the Hierman family, conducted the service.

Interment was in Chandlerville cemetery.

Miss Elizabeth Conover, who has been librarian at the Lincoln library in Springfield for the past four years, has resigned her position and expects to be released from her duties there about June 1st. She will remain at home with her father, H. H. Conover.

Mrs. Glen Davis underwent a major operation at Our Saviour's hospital in Jacksonville Saturday. Her condition is reported as satisfactory.

A call to report in the near future for preinduction physical examination has been issued to each of the following registrants of Cass County Local Board No. 1:

Mr. and Mrs. L. S. Yaple received a letter yesterday from their son, PFC Wm. M. Yaple, saying that he had been liberated on April 2nd.

He was still at the prison camp, Bad Orb, when he wrote the letter April 5th, but expected to be flown to France soon and from there, sail for home as soon as accomdations could be obtained. He stated that released prisoners are given top priority on sailing space so he will probably be home on furlough soon.

Curtis McNeely has been ill at his home for several days this week.

Miss Hazel Cave was ill several days last week and unable to be on duty at the Ben Franklin store.

Mr. and Mrs Edgar Thompson, Mrs. Inez Fisher, Mrs. Hilma Spencer, Mrs. S. E. Gill and Miss Hazel Cramer attended the funeral services in Arenzville yesterday afternoon for Dale Beard, 43, who died suddenly at his home there Tuesday morning. He was employed for the past 27 years by the Home Telephone company.

The couple will make their home in this city.

Mrs. Jeannie Dodds entertained with a dinner at her home Sunday honoring the 4th birthday anniversary of her granddaughter, Virginia Dodds. Those present were Mr. and Mrs. James Dodds and Mrs. Richard Dodds of Springfield, Miss Nellie Dirreen and Mrs. David Dodds and daughter of this city, Mr. and Mrs. Billy Dodds and son and the guest of honor.