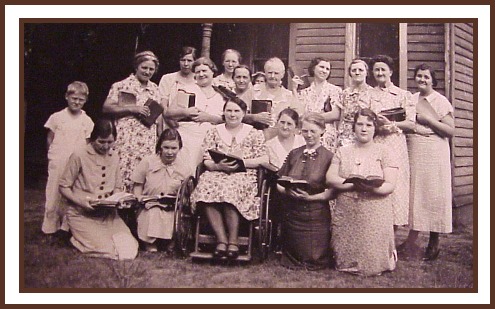 This is a photo of my Grandmother's Sunday School or Bible
class. My Grandmother was Georgette (Peterson) Ribling. She is the third
lady from the right on the back row. She wore dark glasses. I cannot
identify any of the others. The little boy could be my Father, Lester
Ribling, but he does not recognize the boy so it may be another child.
Grandmother attended a Salvation Army church where she was an organist. 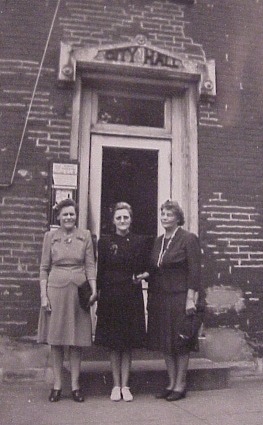 This is a photo of my Grandmother Georgette (Peterson)
Ribling and two unidentified ladies standing in front of the City Hall.
Grandmother is the lady in the middle.

Grandmother died in 1958. She was born in Stillwater, Washington Co., MN, in the 1880s. Her husband was John Earl Ribling who was born in 1887 in Johnstown, Cambria Co., PA. My grandparents came to Beardstown about 1919 shortly after the birth of my Father, Lester. They ran a small store in Beardstown which was very small at first. They later moved to a larger store. My Father does not recall that the store had any name. They sold sandwiches, ice cream, sodas, soft drinks, school supplies, etc. My Father was a soda jerk when he was a teen. He also made fudge. My Grandfather also worked maintenance-of-way for the Chicago, Burlington & Quincy (CB&Q) RR. My Grandparents lived in Beardstown from 1919 until their deaths and both are buried in the Beardstown City Cem. They had only one child, Lester Ribling, who made a career of the Air Force and is now retired and living in Valdosta, GA. My Father was born April 5, 1919 in Minneapolis, Hennepin Co., MN. He married Mildred Lucille Bayless in Houston, TX. You can read more about my family and their kin at my WEB site: