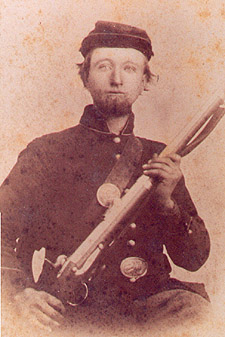 Henry Telkemeyer was mustered into the service of the Union Army on Sept 13,1862 at Camp Butler. He was placed in 115 Regiment Co. I of the Illinois volunteers. He served in many battles including the Battle of Chickamauga and the battle of Tunnel Hill Tenn, and in the fierce battle of Rasaca, Ga. where he was killed in action on May 14,1864. In search of his grave, natives of Rasaca said that due to heavy casualties on both sides that the union dead were left till last, then hauled to Chattanooga, Tenn. and buried in a mass grave. He wrote two letters in German, the last listed below as translated

Camp Blue Springs Tenn Apr.15,1864
Dear Brothers and Sisters: Because I am in good health, I am taking my pen in hand to write you afew lines.Thank God I am in good health,and I hope that these few lines may reach you so. Dear father, we have here now a good life. Dear father, I can also tell you that James Coffan has come on furlough.He leaves tomorrow for home. There he wants to recruit for our Regiment, and I hope that he gets some of those young guys because he can talk fairly well. Dear father, I have heard that the Rebels are now going to leave here for Richmond, Va.. I believe that the Rebels worry that Richmond will be lost, because they know that Gen Grant is here and because they fear him. Dear father, I don't want to worry that we also might have to go to Richmond, because I believe that it will be difficult to take Richmond because the Rebels will do their best there. I don't believe that Gen Grant will attck Richmond, rather that he does not have enough men here. Four corps went away to the Potomac toward Grant. Dear father, there still will be many a man lose his life. We want to hope that it (the losses) could be light. Dear father, I cannot write much news. We have here a bad (winter?) Dear father, it may be that James Coffan surely stays longer because of his recruitiing. With this I want to close for this time. Greetings to Henry Duval and Hermann Fricke
Henry Telkemeyer

Greeting also from all who are here with me Greetings to all who love us in faith Grace be with you all Amen
Co. I, 115 Regt. Ills Vol.
Chattanooga, Tenn.
Dear father,Write me when you have time
Tell me how the wheat is doing there in the countryside